Yesterday Dany was sick.  To be more accurate, he started being sick on Thursday night.  No matter.  D. was sick.  Poor guy felt like he was dying at some point.

When things get that bad, you have to make chicken soup.  It's the ultimate comfort food, right?  That's what you eat when you miss mom, when you need to warm up on a cold day, or when you feel awful.  I don't know why, but this time around, the soup was especially excellent.  Usually I stuff my soups full of veggies.  This is my unashamed attempt to disguise/introduce various unknowns to M.  Over time it became a habit, I guess.  This time, I let it be.  I let it be just chicken noodle soup.  It turned out with a rich flavour, and yet it was a gentle tasting soup.

Take off the skin from the drumsticks and trim the fat off.  Wash drumsticks under running water, place in pot and fill with 1.5L water.  Let boil for 1 hour, add rest of water and let boil for another 1/2-1 hour until the chicken is done.  Remove from heat.  Break angel hair into soup and let sit for 5-10 minutes.  Serve hot. 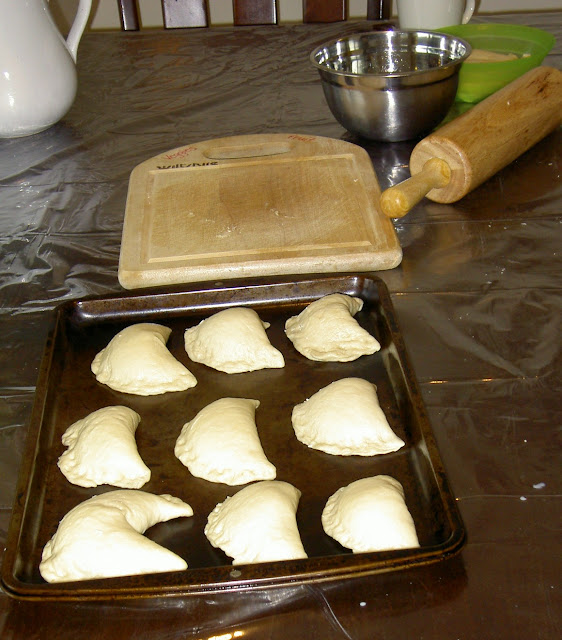 In other news, I found a cool new cheese to work with!  Last week, D. brought home a lovely Lebanese cheese called halloum.  It's a semi-soft, unripened cheese with a piquant taste similar to feta.  I knew it would be perfect for cheese pies!  I also knew I had to use it up fast, because M. loves eating halloum as is.  If I waited much longer, I doubt there would have been anything left.

So we made bite-sized cheese pies together.  Oh, they were delectable!  The perfect cheese for these little darling pies. 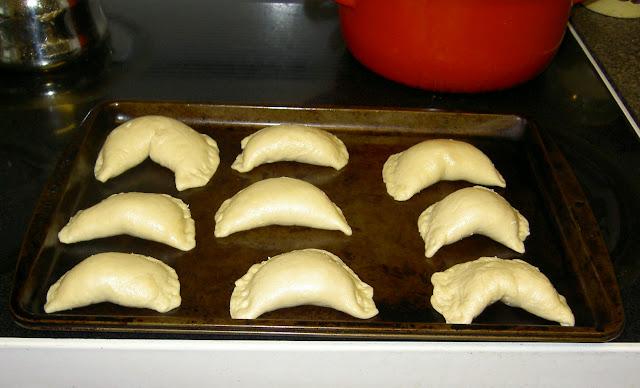 M. was the master chef on this project.  He commanded the rolling of the dough, the adding of cheese and the final sealing of each crescent pie.  (He also made sure the oven light was on so he could "check" on them as they baked.)  It was great fun for the both of us and a much needed break from cleaning!

Mix cheeses together in a bowl.  Take a ping-pong sized bit of dough, roll it out thinly in the shape of an oval on a floured surface.  Place large spoonful or two of cheese towards one end of the oval.  Fold the other end of dough over to cover cheese so that the pie is in the shape of a half moon.  Join edges firmly and seal firmly with a fork to prevent splitting apart during baking.  (I like to fold it over like a pie crust too for extra hold.)  Bake at 350 for about 15-20 minutes, or until golden brown.  They should sound hollow when tapped.  Do not overcook or they will turn out hard.  (I cheat... I bake them for 10 minutes and then broil them for ~2 minutes.) 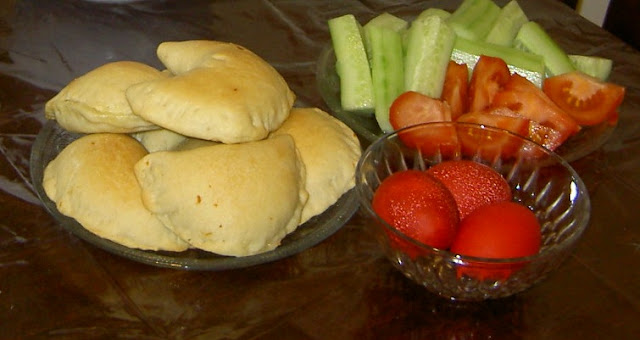 Warm and savoury, we served them for a light supper with our red Paschal eggs and cuccumbers and tomatoes sprinkled with sea salt.  No complaints here.