Snippets from around here 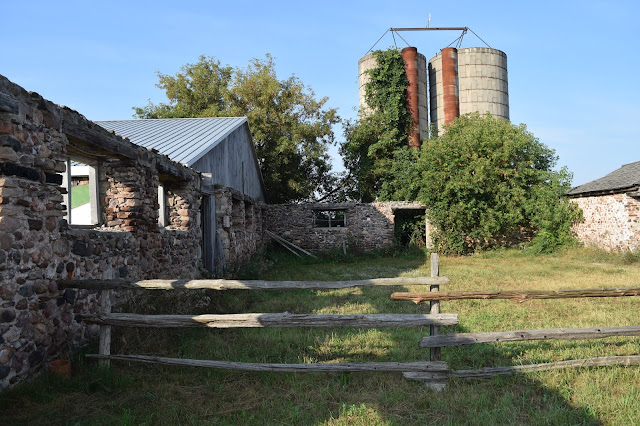 It's back to school as of today and this mama is a little blue missing her two older babies.  (They will always be my babies, as I tell them frequently!)  To welcome them back, S and I cleaned up the house and made strawberry banana popsicles.  It is HOT out there today!  I also have a sink full of dishes for M to do up when he arrives.  Believe it or not, that calms him down and brings him back to himself here at home.  (Sounds crazy, right!?)  That photo below is a list of words (in french) that he spelled the other day.  He thought he should get ready for school.  Hilarious! 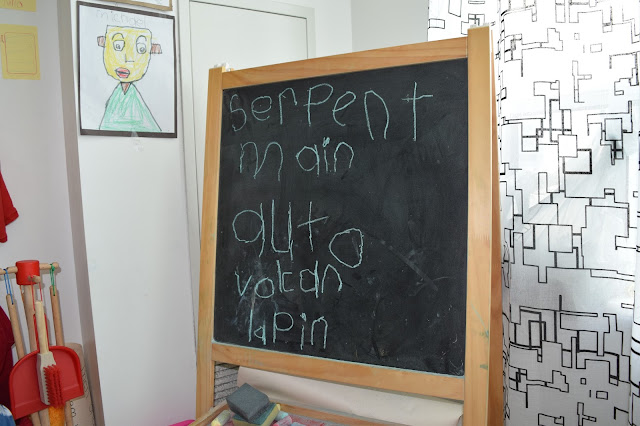 As for J, well, I think she and I will have to cuddle a little and go over everything she wants to talk about.  (That is, after she has her favourite snack - a smoothie from the leftover popsicles.)  And then she can trade places with her big brother if she wants while I wrestle him onto my lap for cuddle session round II.  Sweet little ones, how I miss them when they are gone.

By the way, I finished the lunch bags in time for the first day of school.  Hurrah!  One project crossed off the list.  M and J each chose their own fabric and it was a joy to make them with this pattern.  And they loved them.  So do I.  They are lined with thermal insulation between the inner and outer fabrics, so that should help with keeping things cool (or hot).  M has the pirate animals and J has the princess one.  I think though for any future ones, I will look for a heavier fabric for the exterior.  Something tells me it's a wise idea.  :) 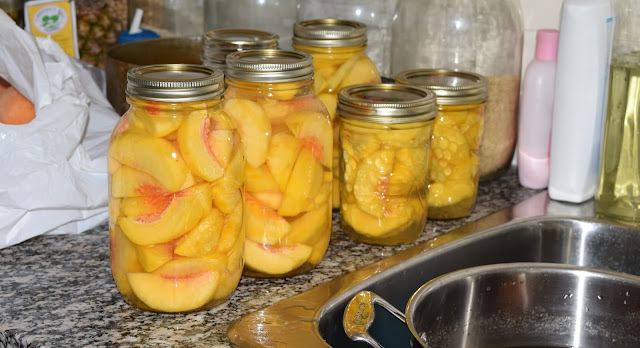 We managed to put aside a decent amount of peaches on Thursday - about 1/2 a bushel.  I, for one, cannot wait to enjoy them in the winter!  The kids were just darlings helping out.  M washed the peaches and then washed the dishes.  J helped put the lids on and screw the bands tight.  I peeled and cut.  And we all talked and talked as we worked together.  We still have a drawer of peaches that little hands reach into at least twice a day.  :)  That is also part of the fun to be sure!  I plan on putting a bit aside in the freezer for when I have time to make peach ice cream.

Can't forget the tomatoes.  This was my goal for this year - to put aside a big batch of tomato paste.  We have a pot of almost-tomato-paste waiting to be finished boiling down.  (It needs another hour or so, but I haven't found the time yet to sit beside the stove as is needed when it gets this thick.)  That's M helping to stir above.  He and D were my big helpers with that bushel.  Between them, they washed, and cut up the whole box.  And M helped run them through the food mill after to get rid of the seeds and skins.  Once it's finished, I'll put it into some freezer jars I have and freeze them.  I learned that trick from my mother-in-law.  She keeps her tomato paste (home-made of course) in her freezer.  Whenever she needs some, she just scoops it out with a spoon.  :)  Clever woman.

On Saturday, we watched a soccer tournament.  It was a great time for the kids running from match to match, kicking a ball around between games with other kids, and just having a ball.  (No pun intended...)  M is especially fervent about soccer.  He just loves it.  I think he takes after dad to a T.

And because they just came into season, we went apple picking yesterday.  I have to say that it was such a great day.  Sweltering hot, mind you.  Not ideal for trekking around.  Luckily grandma and grandpa have a sprinkler.  And so naturally we showed up with a bag of apples on their doorstep.  They kindly fed us lunch and sent us on our way much cooler.  :)

By the way, it's remarkable how observant little children are.  They found so many ladybird beetles, wasps and other tiny insects crawling on leaves or out of apple crevices, to all of which I was rather oblivious until summoned.  M was especially keen on catching said ladybugs.  He kept saying they were eating all the "bad" aphids on the apple trees, and telling J to leave them alone.  J was happiest sitting with S munching on an juicy apple.

These are the moments I treasure.  These are memories that bring me so much joy.  I love storing them up and coming back to them.  It's like finding a $20 bill in your old winter coat!

Wishing you more such sunshine in both rain and shine.