Having a newborn kind of puts the kibosh on a lot of our homeschooling activities.  (I all it homeschooling because that is exactly what it is!)   I will freely admit resorting to various movies or TV programs (God bless Curious George!) to helping me out with the older ones when I need to deal with the younger kiddies. 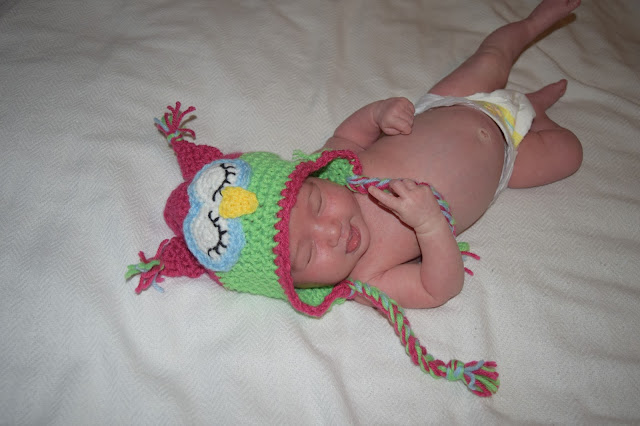 Full disclosure: we do not actually own a TV.  Anything the kids watch is from the computer.  We have found that it is much easier not to get sucked into endless hours in front of the screen this way.  As much as we are able, we are trying to promote an environment of connection, of creativity in our home.  It's so much more rewarding to play a game of chess with a partner, read aloud, make something, write a letter, draw, cook or whatever other activity each enjoys.  And with a small living space, we do most of our activities together or at least around each other.  I would say that is the biggest benefit of small spaces.  :)

When all is said and done, even when the kids are left up to their own devices, lots of interesting things happen.  (Sometimes I wonder if I use the TV more for me than for them, because they do just fine without it.)  And I do so love the Montessori approach (as I've said a million times before) because it builds up to a child being able to work on their own.  This is helpful when dealing with multiple children.  Each child has their own style, their own pace, and their own work.  It is set up in a certain place and ready for whenever they are. 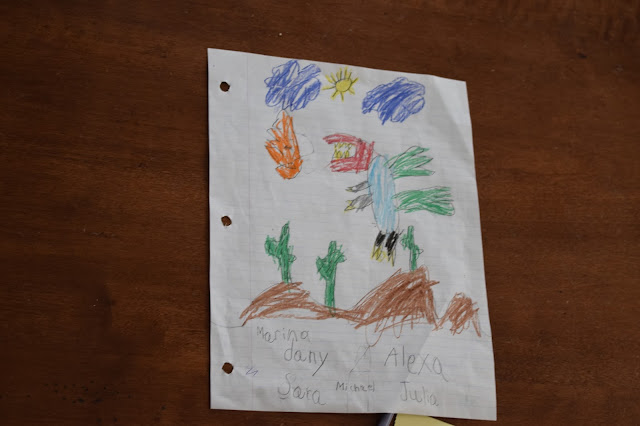 M has moved along rapidly in his reading.  Sometimes I have to slow him down because he "guesses" on a word instead of deciphering it, but he has improved a lot from the summer.  We have added french to the mix, so now he does the same in french.  Since he gets spelling lists each week in french (and english) in school, I've stopped doing it at home.  We just study his school lists together.  His french has definitely improved over the past few months. Besides spelling lists, he writes/copies phrases into his journal, or he writes a letter to someone instead.  He still loves math best and even on a bad day, it doesn't take much persuasion to do some math problems.  He is working on memorizing the multiplication tables.  I try to have him do at least a few addition problems each week so he doesn't forget his addition facts.  This is his latest drawing which he allowed me to share here - a fire-breathing dragon in the desert.  :) 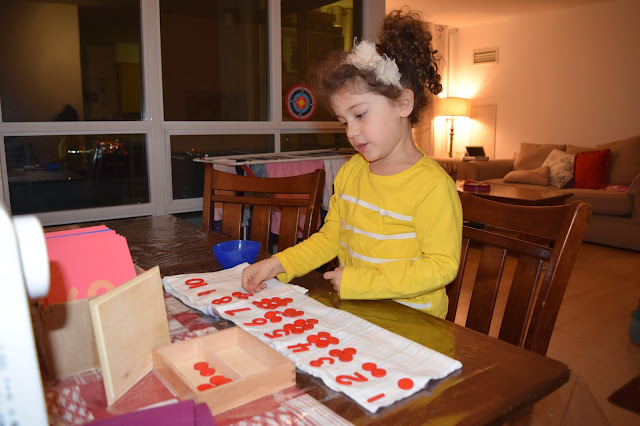 As for J, she is reading books at last.  (It's tough to have so many words strung together on a page, and I feel it's important for them to be ready to succeed before they are introduced to something, so we waited a while.)  We've started with the BOB books (phonetic readers), and isn't she happy to be reading just like her big brother!  She is able to write most letters and numbers and practices this by copying words I write out on paper or in our sand box.  This is aside from spelling with the large moveable alphabet.  She is also working on numbers and knows the symbols up to 10 and can retrieve the corresponding quantity.  She loves the big number rods still, though more and more she opts for the smaller ones.  And of course, practical life activities (like wet-wet pouring, sponging, wiping tables, sweeping, etc.) are her favourites.

S actually started doing activities more "formally" (or should I say purposefully?) this year, though I don'r exactly remember when.  For the past few weeks, she's been working with the sandpaper letters.  One morning, she lifted the box of letters off the shelf, brought them to me on the sofa and held one up.  I told her what it was and the rest, as they say, is history.  I can't get over how quick she is.  She's not even 2.5 yet!  (Wish I knew about Montessori when the others were that age!)  She also does tons of practical life activities.  She can put on her shoes, peel an egg by herself, sort things, etc.  She does love sponging, spooning, pouring and even colouring and tracing the metal insets.  I think she sees her siblings and wants to be a part of what they're doing. 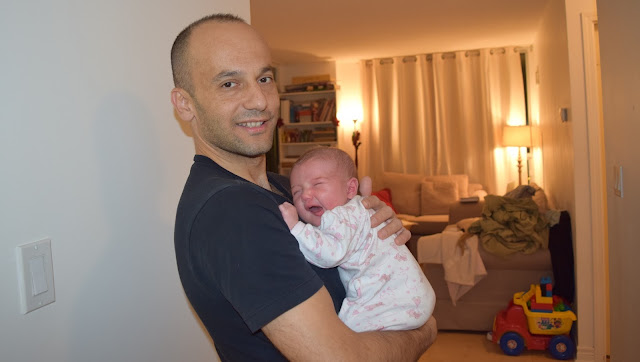 Baby M is working on growing.  That takes up all her time these days.  She did smile at me consciously for the first time yesterday.  That was awesome!  I love those moments.  And then I look like a goofball cooing at her with a big smile plastered on my face trying to get her to do it again.  Sometimes she does!  It's the highlight of my day!  So, while my darling children are getting "smarter", my IQ is dropping by the minute.  Hilarious.

C'est la vie.  There are other less regular goings-on like science activities (M and I made a racing car that runs on a rubber band, J is learning seeds and the life-cycle of a plant); geography studies (solar system/continents for J, and continents/countries for M); and art projects (lately we're really into needle and felt crafts).  I hope to get some watercolour painting with the kids over the holidays.  But that's it in a nutshell.  (I am deliberately trying to be detailed here for my own future reference.)

I should mention that we don't usually spend so much time schooling on the whole.  The activities are actually designed to take a short amount of time - say 10 minutes.  It's the continuous repetition that cements the concept.  (Although if a child really enjoys an exercise, they are free to repeat it ad infinitum...)

Well, that's my last school "report" for 2015.  I am off to the grocery store with the two younger ones to get some baking supplies.  We have almond bark and peppermint bark to make as gifts for Christmas.  Wishing you a wonderful week!