M found a snail today.  It was climbing the wall of our condo building.  It had got to eye-level - at least to a 3-year-old's eye - when M spotted it and snatched it up.  The snail wisely retreated into its shell, and M joyously poked his finger into the opening as he yelled "Look Mommy, a SNAIL!"

Honestly, I felt sorry for the snail.  Could you imagine being that poor little guy?  Some kid's finger jabbing at your eyes as you try to squeeze yourself further into your shell.  That shell probably seemed quite spirally spacious at one point.  Now, the number of spirals are nowhere near enough.  Even just one more would be oh so helpful... 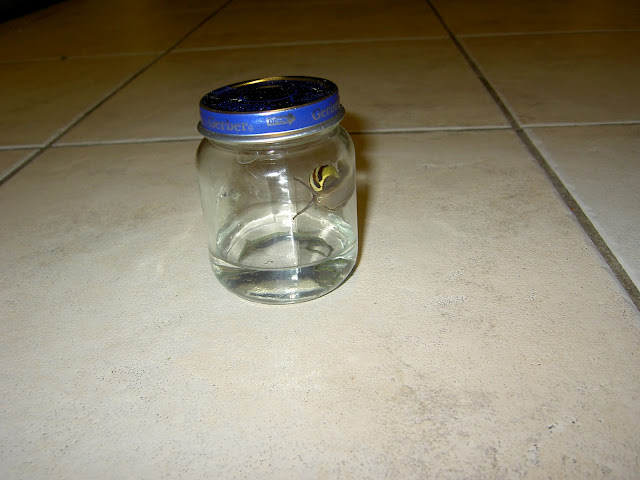 Slimy (as he was eventually named) was finally rescued and placed in a clean little jar.  With a lid.  See, snails have a neat trick they like to try.  It's called "watch-how-fast-I-can-climb-out-of-this-jar".  The first snail we ever brought home tried this one on us.  One moment he was at his ease in a cozy jar.  The next minute, he had disappeared.  M found Houdini making a bee-line for the bookshelf.  (Perhaps slugs like to read...? )

Anyhow, that explains the lid.  I've yet to meet a snail who could get out of that one.  Here he remains at present.  Until we decide we're ready to take the plunge and boil him.  I'm kidding.  Escargot may be considered a delicacy in some parts of the world, but I for one cannot imagine eating a snail at this point any more than I could eating spiders.  Slugs can stay on the ground for all I care.  Same with spiders.

Apples are a different story.  I can't get enough of apples.  I tell you, truly a wondrous fruit.  They pair well with many gastronomical delights.  Salads, cheeses, meats, pies.  And cake.  Who doesn't love cake?!  That is a heavily rhetorical question, so if your answer to cake be "nay", do keep it to yourself and don't spoil my illusion.  Back to apples and cake - I had a hard time deciding if apple cake is better in Fall or springtime.  Solution?  Bake an apple cake and see!

Out came the apples.  And the pans.  And all the fiddly ingredients that make cake!  Mixed it all up, popped it into the oven and an hour and a half later, a cake was born.  A sinful cake.  When you think "apple", even for desserts, you don't usually think "sinful".  This was sinful.  Why?  The topping.  Caramelized brown sugar with pecans and oats.  And butter.  I must confess though that I also use margarine.  It's not bad, but you'd have to be pretty hard pressed to use margarine if you've ever tried it with butter.

My friends, there are no pictures of this cake.  No pictures at all.  Alas.  Do come back at some point in the near future when I have the presence of mind to snap a photo before demolishing a whole cake.  In one sitting.  (Such apple-y goodness...)

Heat oven to 350 degrees F.  Peel apples and chop finely.  Mix dry ingredients together, save the apples.  Add water and oil and mix well.  Add apples and mix to combine.  Pour into a lightly greased loaf pan.  Bake for about 20 minutes.  Remove and sprinkle (or gently spread as the case may be) evenly with topping mixture.  Bake for another 40-50 minutes until toothpick inserted into centre comes out clean.  Let cool.

Topping: Cream butter and sugar together.  Add oats and pecans and mix well.