While not always punctual, it seems that I have fallen into weekend blogging.  Meaning, I usually post after the weekend has passed, and often about the weekend too.  It seems to work for now.  We are busy enjoying each other during that time, and after all that connecting, I am only too happy to come here and unload all that joy.  :)  Of course, it's not all fun and games.  There are definitely rough patches in our lives.  I struggle often on what to share and what not to.  It's not just my my story to tell.  I want to respect the other members of my household, and those others who touch our lives as well.

So just for the record, there are many things that happen around here (as everywhere else I'm sure) that are not seen.  In all things though, I do try to focus on the positive because it is easy to get sucked into a negative "energy" vortex, and I personally tend to often veer towards the melodramatic.  (And pregnancy hormones do NOT help with that...)  So this is a place where I try to focus on and remember and celebrate the beauty and blessings around me.  And I am 100% sincere in what I write.  Every single word.

I mentioned I've been trying to sew that quilt a few strips at a time.  Well, I've finished piecing the squares together and now needs pin the strips together to sew up.  I am happy that this sewing rhythm is not eating into other important parts of our days.  My dear mama came by on Friday to help me make and freeze a batch of meat and cheese pies.  They are safely in the freezer (minus a dozen or so that the kids gobbled up) for when baby comes.  While I don't have a large freezer, I am trying to stock up on food for when things are especially crazy.  You just never know.  I am hoping I can squeeze at least one or two more such sessions before D-day arrives.  We'll see. 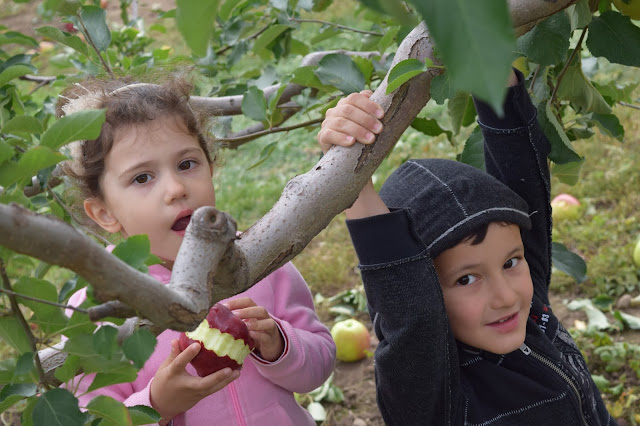 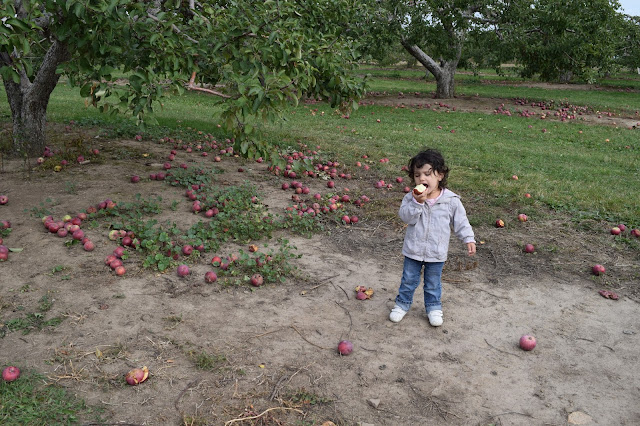 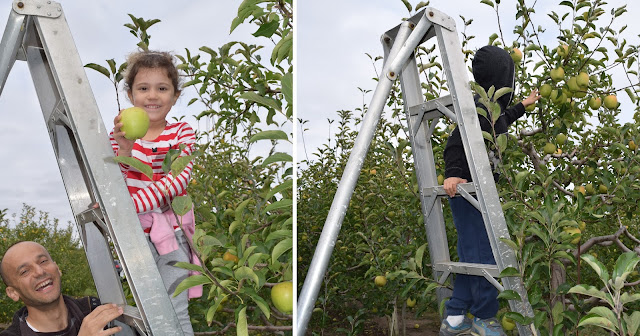 Just as we ran out of apples, D decided to take us apple-picking again.  If you haven't noticed, apple-picking is not just a once-a-season affair for us.  We are not tourists about it.  We love our apples.  And we love picking them ourselves as they come in season.  It is so satisfying to tune in to nature's timeline.  This time we got some Golden Delicious, Jonagold (duh!) and we had some Macintosh and Mutsu to round things out.  I think there will be at least one last run before the season is over.  Too bad we don't have an extra fridge.  I'm convinced it would be devoted to at least 90% apple storage if so.  And while I'm at it, I wish we had our OWN orchard!  Now THAT would be awesome!  Just mosey on out into your backyard and pick a few whenever you wanted...  A gal can dream.

M made a poster in french for the letter "M" for school this past week.  He was so into it.  I mean, I got into it too, but he was hardcore.  (I did the drawings, and he did the colouring, writing and glueing.)  We had finished working on it the night before and that was that.  In the morning, M woke up at 6:30, came to me (thankfully I was already awake) and said very seriously, "Mom, we forgot something.  We forgot 'masque'."  And he proceeded to coach me on how to draw a mask for him to colour and glue it on a small empty patch right up near the corn.  Hilarious kid.  Although, I imagine how it would've been less hilarious had he actually woken me up.

The school adventures don't stop there.  Aside from reading (boy is she getting speedy at spelling!), J is obsessed with pets.  Not the typical kind, mind you.  I mean snails, spiders and all things small.  She brought home a snail from school.  There is a wall outside the school apparently, that with the changing of seasons has had quite an array of snails stuck to it.   So my darling daughter put one in her backpack and brought it home.  Of course, she lost it for a while because it had climbed up the other side of the pocket she zipped it in, but once we found it again, all was well.  I do feel badly as the snail died a couple days later.  I told her he (or she?) needed to be outside and that was the best place for little critters.  So far she hasn't brought any more home, so perhaps the message resonated?  Although when she and M found a spider in the bedroom, they put it in a cup and kept it for a couple of days before D kindly let it outside.  Not before they accidentally crushed some of its legs with a small pebble they put inside the cup though...   (Apparently they wanted spidey to have a rock to rest on.)  I think we need to work on that before we look into getting any real pets.  :)

So yes.  It is Wednesday and we are halfway through the week.  My how time flies.  I don't feel any "nesting" instincts kicking in so far, which is a little disappointing.  It's nice to have all that energy to work.  Most days I'm practically forcing myself to go through the motions.  Thank God for D.  And for all these little hands who love to help out mama (well, most days...).  I suppose there's still time.

Wishing you a wonderful week!