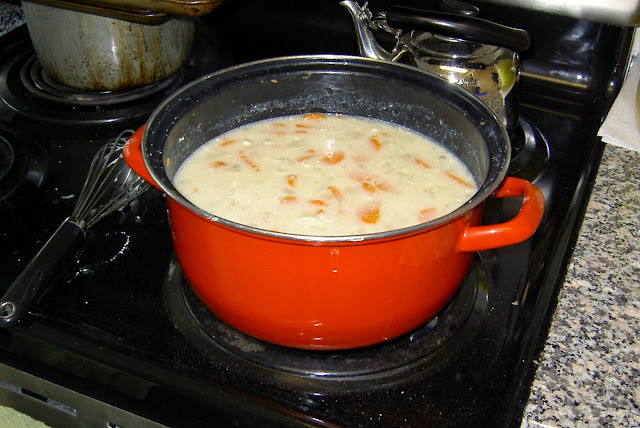 Leftovers are my saving grace.  I deliberately make double recipes for meals so that I can freeze the second half for later.  I just find it to be a small way to keep sane when things get crazy without warning.  (And let's be honest, there is rarely any warning before a storm hits!)

There are times however, where people get sick of eating the same dish over and over again.  Especially my kids.  Unless it's hamburgers, they have a pretty low ceiling for leftover tolerance.  Here's where culinary creativity gets big points!  Alas, I do not have this creativity.

I've seen firsthand cooks who can whip up various dishes using the same leftovers in almost the blink of an eye.  These same geniuses can make dinner using ANYTHING.  Anything I tell you!  Hand them some weird combination of ingredients and they will have supper on the table in a twinkling.  And I'm not talking about trained chefs either.  I'm talking your average Joe.  It's quite depressing really.

When I was a teenager, I used to want to be famous.  Now, all I want is to have this transforming-leftovers superpower.  (A gal can dream!)  I came kind of close today though.  We had whitefish a couple of days ago.  We love fish - drizzled with olive oil, sprinkled with salt, stuffed with lemon wedges and baked in the oven until flaky.  Yum!  But this was probably the third time we'd had it this week.  The kids refused to have fish again.  I didn't want to throw it away and I didn't know how safe it was to freeze fish that'd been been cooked 4 days ago.  So I was in a conundrum.

Luckily, I had a conversation with a friend the other day and she mentioned her success with clam chowder.  "CHOWDER!", my brain exclaimed, "That's exactly the solution I need!"  And so, this simple fish chowder was born.  And let's be honest, nothing beats hot soup on a cold day.

Peel carrots and onions and chop.  Peel potatoes, wash and chop roughly.  Add vegetables to large pot and cover with water.  Add bouillon and stir well.  Let boil until veggies are fork tender.  Pour soy milk into a small pot, add flour and heat until thickened.  Add to vegetable pot and stir well.  Add shredded fish and reheat until hot.  Flavour with salt and other herbs.  Let rest for at least 15 minutes.  Serve hot with crusty french bread or those posh oyster crackers of which I have none.